Beniamino Paganini (b.1994) is a passionate traverso player, harpsichordist and ensemble leader. He received his master degrees for traverso (2016), harpsichord (2017) and Maestro al Cembalo (2019) and bachelor degree musicology (2018), all with great distinction. Beniamino is the artistic director of his ensemble Musica Gloria and performs regularly with various other ensembles such as Il Gardellino (Jan De Winne and Marcel Ponseele), Scherzi Musicali (Nicolas Achten), B’Rock and La Petite Bande (Sigiswald Kuijken). The Belgian music press has named him Young Musician of the Year 2020.
Beniamino discovered his passion for early music at a very young age. At 16, he joined both Royal Conservatories of Brussels and some years later the Conservatories of Leuven and The Hague. He studied traverso with Barthold Kuijken, Frank Theuns and Jan De Winne, renaissance flute with Kate Clark and Patrick Beuckels and harpsichord with Frédérick Haas, Fabio Bonizzoni, Patrick Ayrton and Kris Verhelst. He took part in masterclasses with Nicolas Achten, Marten Root, Karl Kaiser and many others. Besides his main instruments, traverso and harpsichord, he also performs on organ and recorder.
He received several first prizes, and with traverso he reached the semifinals of the renowned International Competition Musica Antiqua Brugge (2014) and of the International Telemann Competition (2015).
He is accompanist and harpsichord, traverso and chamber music teacher at the music academies of Aalter, Gentbrugge and Overijse. 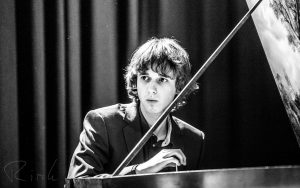 Music has higher intentions,
It doesn’t have to fill the ear
But bring the heart in movement