Nele Vertommen (b. 1999) was already fascinated by early music at the age of five, when she heard Bach’s St Matthew Passion. It was clear to her that she wanted to be able to play this music herself.  A few years later she began oboe lessons with Korneel Alsteens.  When she discovered, after two years of playing, that those beautiful oboe solos from the Matthew Passion were actually written for the Baroque oboe, she made the decision to become a Baroque oboist.

At the age of fourteen, she began studying baroque oboe, and by fifteen she was a student at the Royal Conservatory of Brussels, in the class of Marcel Ponseele. After a gap year in The Hague in which she studied both baroque oboe and recorder, she received her bachelor’s degree with highest distinction.  Once back in Belgium, she completed her master’s degree in Brussels, also with highest honors.  For her graduation she received a prize from the artistic foundation “Horlait-Dapsens”.

Nele performs regularly with ensembles including Il Gardellino, A Nocte Temporis, Collegium Vocale Gent, Musica Gloria, La Chapelle Harmonique, Margaretha consort, Terra Nova Collective and La Petite Bande. In 2021 she was selected by Klara to be part of their eponymous program « twenty musicians in their twenties ».  For several years now, she has been working with her partner Beniamino Paganini to develop the ensemble Musica Gloria. In the 2021-2022 season, this ensemble will be playing in concert halls such as BOZAR, 30CC, AMUZ and Concertgebouw Brugge, and in May they recorded their first 2 CDs, which will be released in the near future.

Recently, Nele started playing the dulcian and is focusing more on the recorder, so that she can also add 16th and 17th century music to her repertoire.

The first time she competed, in September 2021, she won first prize. This at the international Telemann competition in Magdeburg. 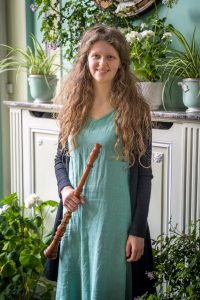 Music master: Doesn’t war come from a lack of unity between people?
Mr Jourdain: That’s true.
Music master: And if all people would learn music, wouldn’t that be a way to tune together, and to see universal peace in the world?
Mr Jourdain: You are right. 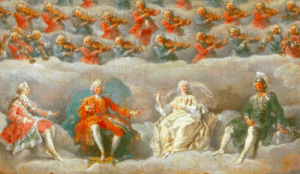